It is important to make everyone aware of the legend of Chaar Sahibzaade. The more their story spreads, the stronger will be the urge in our youth to return to their roots!

I have been pursuing the cause of creating awareness about the heroic deeds, unparalleled valor and supreme sacrifices made by the revered sons (lovingly called Chaar Sahibzaade) of Sri Guru Gobind Singh Ji who sacrificed their lives for the cause of justice and freedom of religion.

India has always been a nation that stands for peace and humanity. Owing to the influence of western culture, Indian families are struggling to give the right examples to their children. Children are going astray for choosing wrong role models. To save the nation from the bankruptcy of ethical heroes and lack of pride-brimming examples; it is important to make everyone aware of the legend of Chaar Sahibzaade. The more their story spreads, the stronger will be the urge in our youth to return to their roots!

Indian needs to tell the story of Chaar Sahibzaade to the world. It is because of the sacrifice made by Chaar Sahibzaade that the cruel Mughal emperor Aurangzeb had to drop the evil policy of forceful conversion of people into Islam. Chaar Sahibzaade fought for the country and freedom of religion against foreign invaders – Mughals. All of them died as martyrs at a very tender age.

They followed in the footsteps of their grandfather Sikh Guru Sri Guru Tegh Bahadur Sahib Ji who sacrificed his life to fight the Mughal oppression against Kashmiri Pundits. Similarly, Sahibzada Ajit Singh Ji and Sahibzada Jujhar Singh Ji (Age 18 and 14 years old respectively) along with 40 Sikh warriors achieved martyrdom as warriors in the battle of Chamkaur Sahib. While the younger ones, Chotte Sahibzaade, Sahibzada Zorawar Singh Ji and Sahibzada Fateh Singh Ji, were just 6 and 9 years old when they were bricked alive for refusing to accept Islam. 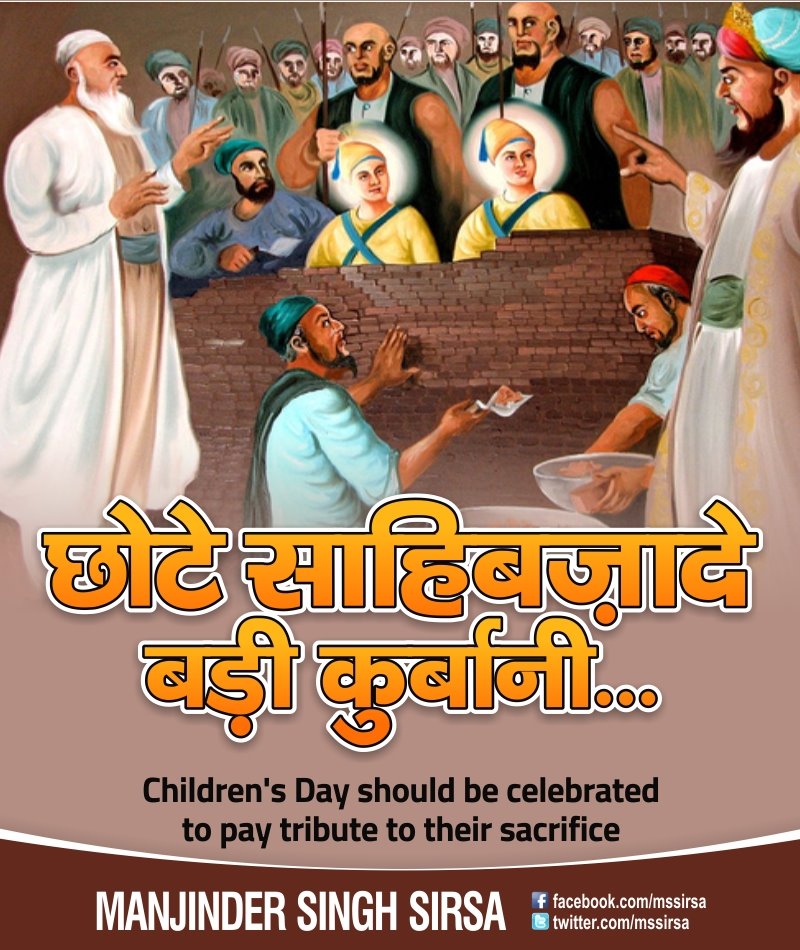 There is no comparison of valor, sacrifices made by them not only in the history of India but also the history of world. Chote Sahibzaade fought like valiant soldiers and chose to be bricked alive but did not bend in front of the threats or lures given by Nawab Wazir Khan of Sirhind. 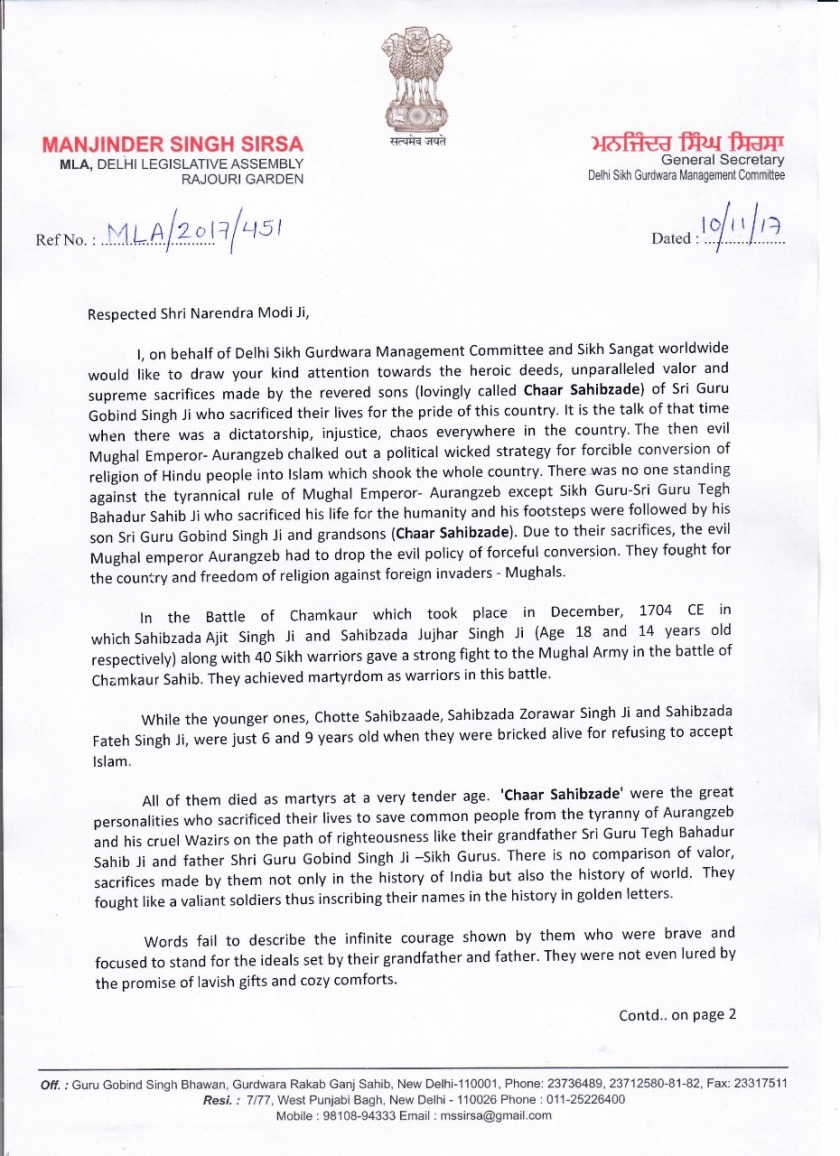 Whenever I talk about the ‘Shahadat’ of Dasham Pitah Sri Guru Gobind Singh Ji’s sons; I feel overwhelming emotions because there exists no other example in history of any other country where children laid down their lives so fearlessly… for the sake of humanity and commitment.

Whenever I talk about the ‘Shahadat’ of Dasham Pitah Sri Guru Gobind Singh Ji’s sons; I feel overwhelming emotions because there exists no other example in history of any other country where children laid down their lives so fearlessly… for the sake of humanity and commitment.

Let me first tell you the story of Chaar Sahibzaade and their exceptional Sacrifice.

Sahibzada Ajit Singh Ji and Sahibzada Jujhar Singh Ji were 18 and 14 years old respectively when they along with 40 Sikh warriors gave a strong fight to the Mughal Army in the battle of Chamkaur Sahib. They achieved martyrdom as warriors in this battle.

The younger ones, Chote Sahibzaade, Sahibzada Zorawar Singh Ji and Sahibzada Fateh Singh Ji, were just 6 and 9 years old. Mughal army arrested Mata Gujri Ji (the mother of Sri Guru Gobind Singh Ji) and Chote Sahibzadas near Morinda. From there, they were handed over to Suba Sirhind, where they were imprisoned, in the Thanda Burj (Cold Tower). Nawab Wazir Khan of Sirhind was a cruel man. He asked them to convert to Islam if they wanted to live a happy and comfortable life. 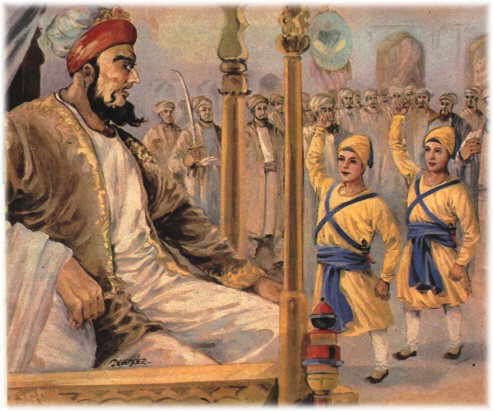 Historians account that the brave kids had replied raising Jaikara, “Waheguru Ji Ka Khalsa, Waheguru Ji Ki Fateh”. Chote Sahibzaade told Wazir Khan that Sikhism was dearer to them and they were kids of lion Guru Gobind Singh and grandsons of Sri Guru Tegh Bahadur who laid down his life to defend the right of religious freedom.

Upon their continuous rejection of the idea of adopting Islam, Nawab Wazir Khan decided to punish them and in a heinous and cold-blooded manner.

Sahibzada Fateh Singh and Sahibzada Zorawar Singh were bricked alive and later killed in the presence of entire Assembly.

Words fail to describe the infinite courage shown by them who were bravery and focussed to stand for the ideals set by their grandfather and father. They were not even lured by the promise of lavish gifts and cosy comforts.

They chose a painful and tragic death entombed within a wall of bricks and mortar but made no compromise on the values and ideals of Sikhism.

I ask you dear readers – have you ever heard or seen any such incident of bravery shown by kids of such young age? If no, let us all acknowledge this as the supreme sacrifice. 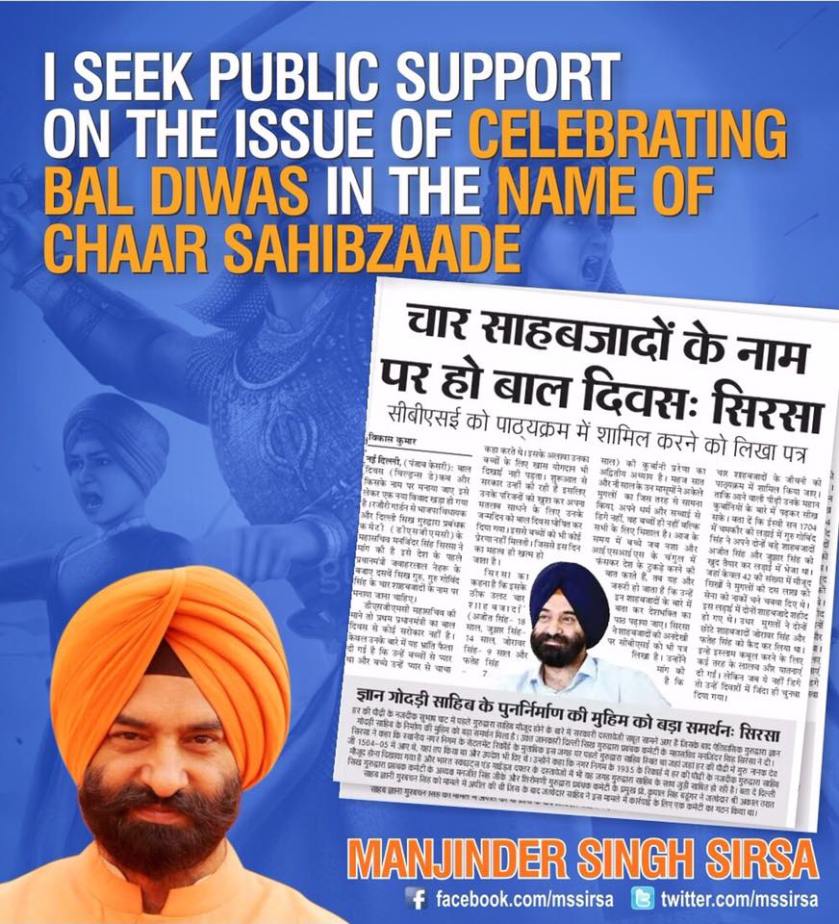 It is my earnest wish that India should pay homage to their sacrifice by celebrating Children’s Day in their name. This will give children of our country the finest idols who stood bravely in the wake of torture and tyranny.

I request PM Narendra Modi Ji to pay tribute to the Shahadat of Chaar Sahibzaade by dedicating Children’s Day in their name.