What motivated me to take up this mission is the zeal to make the next generation aware of  supreme sacrifice made by Chaar Sahibzaade for the nation and humanity.

Every time I shared some post or video about the story of Chaar Sahibzaade, friends and followers on Twitter and Facebook would express their desire to know more. Many often said that their story should be taught as a part of our history books. Today, I am so glad that from next academic year, NCERT books will include a chapter narrating the story of Chaar Sahibzaade.

The National Council of Educational Research and Training (NCERT) has agreed to consider inclusion of a chapter on ‘Char Sahibzaade’ of Sri Guru Gobind Singh ji in its syllabus from next year.This was communicated by NCERT. 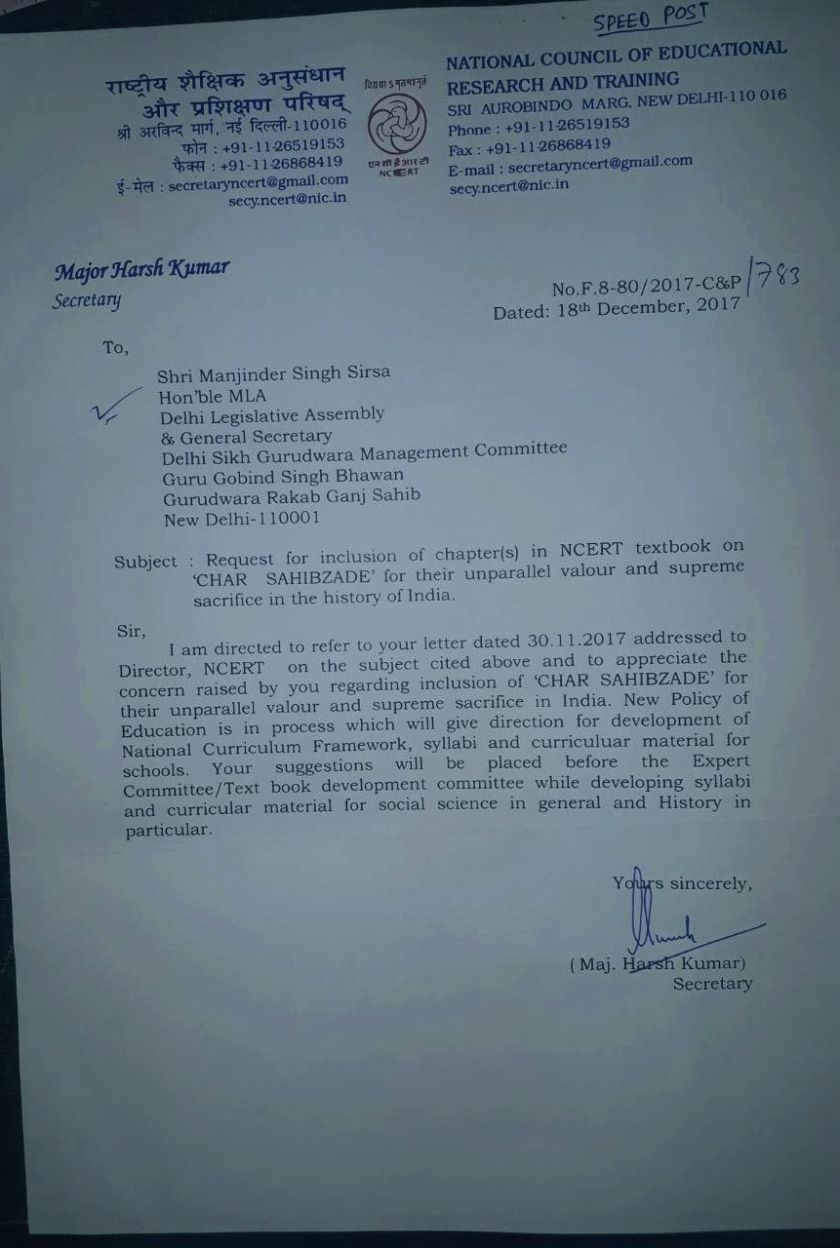 The credit for the same goes to out Hon’ble Prime Minister Mr. Narinder Modi Ji. I had urged him to issue suitable directions for accomplish this task.

In a communiqué written to me on the issue, the Secretary of the NCERT Major Harsh Kumar stated that Director NCERT has appreciated my concern regarding inclusion of story of ‘Chaar Sahibzaade’ for their unparallel valour and supreme sacrifice in India.  He informed that new policy of education is in progress which will give direction for development of National curriculum framework, syllabi and curricular material for schools.  His letter states that this suggestion will be  placed before the expert committee/text book development committee while developing syllabi and curricular material for social science  in general and history in  particular.

What motivated me to take up this mission is the zeal to make the next generation aware of  supreme sacrifice made by these four Sahibzaadas for the nation and humanity. There is no parallel in the world of the sacrifice they made at such a tender age. That’s why it is imperative for the children of the nation to know how and when  incidents of historical importance took place which shaped the destiny of the country.

I now urge all the education boards of different states to include chapters on history  of supreme sacrifice in their syllabi so that children studying in these states can get equipped with these incidents of historical importance.

I also seek support of all in requesting our PM Modi Ji to consider dedicating Children’s Day to the life of Chaar Sahibzaade. That would be true tribute to their supreme sacrifice.